Track guidance on railways is provided by steel guideways (rails) and correspondingly shaped wheels, which are also made of steel. This is why we also speak of the wheel/rail system.

On the railway, the track guidance with its low lateral play is the essential prerequisite for being able to form trains which – depending on other prerequisites – can be several kilometres long and weigh up to approx. 20,000 tonnes. Although several locomotives are used for very long trains, which also run in the train or at the rear of the train to limit the draw hook load, these can be controlled by one driver from the front. This personnel saving is a major system advantage of the railway.

For railways as well as for tramways, urban railways and underground railways, the track guidance principle using flanged wheels with a conical running surface profile has proven its worth. Such a design leads to the following mechanism of action:

Mounting the wheel flanges on the inside of the wheel prevents the wheel from sliding off the rail to the outside.
© VDV 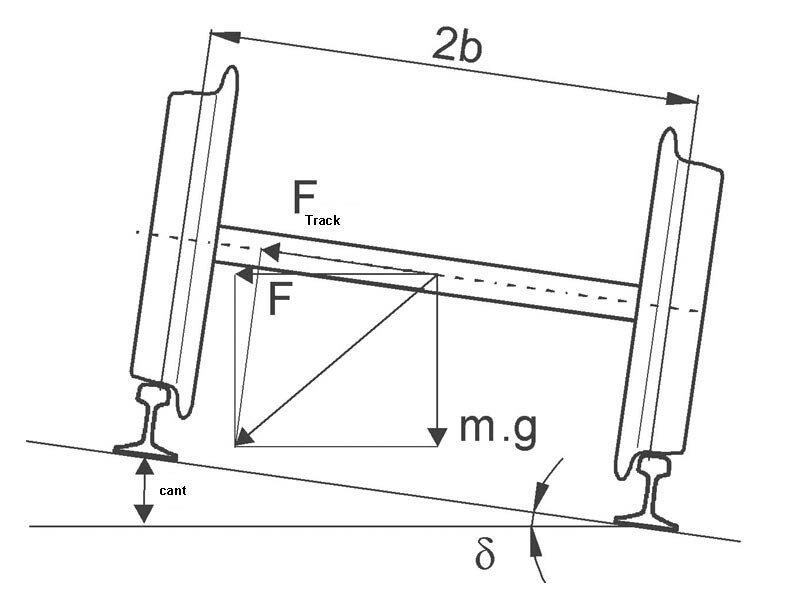 Forces on the wheelset in the canted track curve
© Haigermoser

When guiding through curves, the wheel flange runs against the rail running flank mainly on the outer rails in the curve.

The inner wheel flanges lead to the fact that in the event of the wheel flange hitting the rail running flank, the associated wheel (unlike with outer wheel flanges) receives additional force components.

These additional wheel contact forces acting on the leading wheel when passing through a track curve arise from moments of the axle bearing lateral forces around the longitudinal axis of the running gear as well as from moments of the centrifugal forces acting above the flank contact of the wheel flange and the rail. As these moments act outwards in the curve, a corresponding reaction moment of the wheel contact forces arises. In this case, the wheels driving and guiding on the outside of the curve are also subjected to the contact force. This has the advantage of increasing safety against derailment. The wheels running on the inside of the curve are relieved.

If there are guiding devices next to the inner rail in the curve, these can transfer the guiding forces by the wheels running against them with their flange back flank or their wheel back. This has the disadvantage that the wheels travelling on the inner rail of the curve are subjected to lower vertical wheel contact forces than the wheels travelling on the outside of the curve, while the lateral guiding forces remain the same. As long as the lower wheel contact force compared to the wheel running on the outer rail of the arch is only a few percent, this is insignificant if there is sufficient safety against derailment.

Influence of track guidance on the guideway

The track forces acting on the track result from the interaction between the vehicle and the track. The magnitude of the forces occurring as a result of track guidance is significantly influenced by the alignment of the track. In particular, system-related reaction forces of considerable magnitude occur the faster a change of direction takes place and the smaller the curve radii are.

Safe track guidance requires that a wheel axle is guided as uninterruptedly as possible on both sides. In continuous track, this is ensured by the inner running flanks of the two rails approached by the wheel flange end flanks.

In switches and crossings, however, there are interruptions of the running flanks in the area of the crossings, which are not always safely covered by the chord length at the flange face at the level of the contact line of the flange and the rail running flank. In these cases, there are so-called trackless sections. In switches, uninterrupted track guidance is ensured by additional check rails.

In order to reduce the lateral acceleration acting on the passenger, the track is usually canted I n the track curve. Track cant means that the outer rail is a certain amount higher than the inner rail. The track is therefore inclined by the angle δ.