Werner Siemens presented his first electrically powered locomotive on 31st May 1879 in Berlin. It was a small machine driven by DC which flowed through the mutually insulated flat iron running rails. The first applications of this principle were mine railways and briefly the first tram which ran from 1881. Since the risk of electric shock when crossing and entering the live track system for humans and animals (with metallic horseshoes), was too big, overhead lines were quickly introduced.

Electrical standard gauge operation only began in 1895, and it was in the USA. At that time, overhead lines, also called catenaries, were already state of the art technology. There were many types of pantograph which always collected current from below the wire. These included sliding bow, sliding shoe or roller, as well as various types of suspension. Experiments were made with three contact wires for collection of three-phase alternating current (AC). However, these did not meet the practical requirements. Starting in 1904, in Austria with the Stubaitalbahn, single-phase alternating current was used for railway operation. One contact wire was sufficient here as in the case of DC railways. Only for trolley buses which are a special case of an "electric railway without track" and on five railways worldwide are today two contact wires (poles) required in order to complete the current circuit. Otherwise for all railways with external power supply the steel rails of the permanent way form the return conductor.

Electrical energy for railway operations is supplied in a wide range of voltages and - in the case of alternating current railways - also in a wide range of frequencies. This range is, firstly, due to historical reasons, and secondly, due to typical national factors, and in addition has undergone further technological developments. So, for example, DC railways in closed networks which once were supplied with 500 V or 600 V, have today been upgraded to 750 V up to 1,000 V. Thus, the transmission losses in the line are less and at the same time the use of regenerative braking current is more effective. Electric traction power networks of main line railways have been steadily extended, but, because of the enormous cost of conversion, generally remain with the system of traction originally chosen. All railway power supply systems differ from the usual local electricity grid in Western Europe (three-phase AC, 50 Hz different maximum voltage). Thus, high-voltage pylons for railways are easy to distinguish from those of the national grid: railway power lines will always be provided in pairs, those of the general national grid in groups of three.

The electrification of railways began with DC systems. DC motors are simple and robust. They are easy to control and have a high starting torque but require resistors in the control system which involve power losses. The number of these is gradually reduced as the vehicle starts away from rest. Another problem is that highly powered DC motors also need high currents, as the voltage remains unchanged and mostly quite low (power is equal to voltage times current, P = VI). For high currents, however, a large conductor cross-section is required. DC cannot be transmitted loss-free over large distances. Only with increasing voltage and, therefore, a smaller current will the line losses fall. If main line railways are operated with direct current, therefore, they generally use a higher voltage of 1,500 or 3,000 V compared to trams and electric narrow-gauge railways with their regional networks (600 to 1,200 V).

Alternating current (AC) systems are as widespread as DC systems, but because of their advantages the trend in comprehensive electrification for new networks or new high-performance routes is towards alternating current. Its great advantage is that it can be transformed. High voltages can be combined with comparatively low transmission losses even over large distances, ideally as three-phase alternating current (AC, "highest voltage" and "high-voltage national grid”, high-voltage railway power supply network). At transfer points the lower voltage single-phase alternating current will be produced from the railway grid at substations, (which are about 60 to 80 km apart). 15 kV is usual in Germany, Austria and Switzerland. The 50-Hz frequency supply could not initially be converted satisfactorily for use in AC motors and so a third was used, 16 2/3 Hz, which today has become 16.7 Hz. Other railways use 25 Hz. Should railway electrification be begun in a country the network can also be supplied with 50 Hz, modern motors with power electronics can handle this without problems. 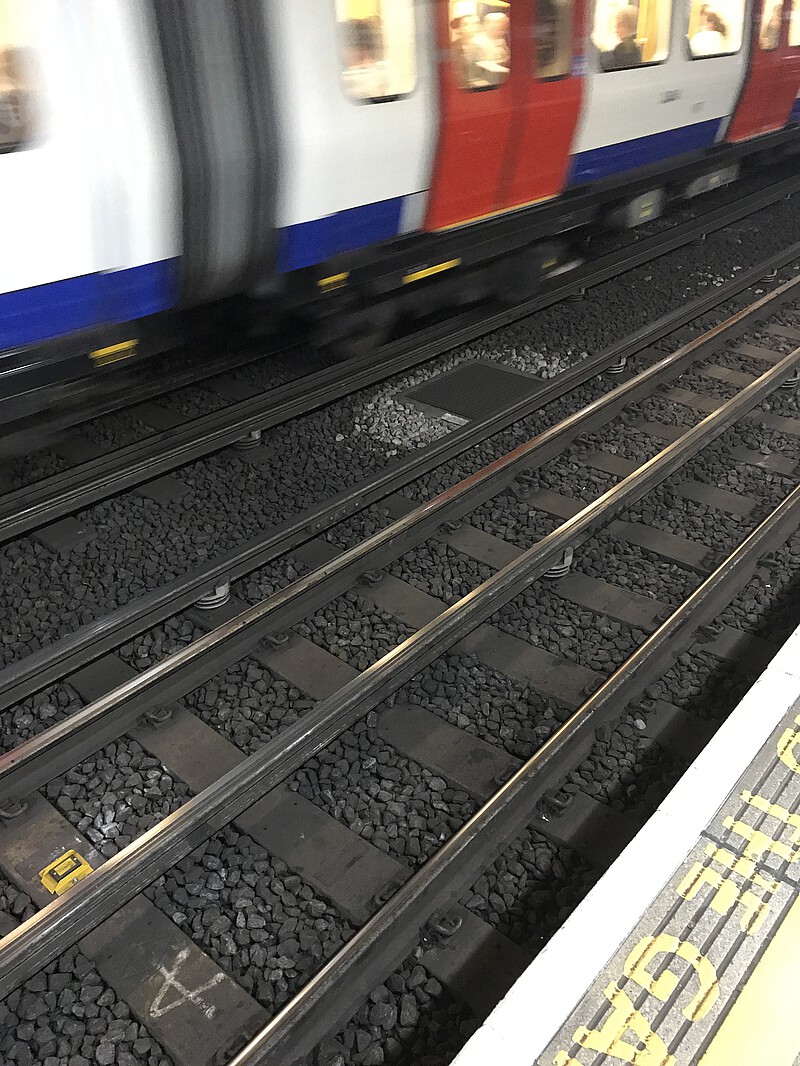 Overview of power systems in the EU

Four power systems are widely used in Europe's national railway networks, and, in some cases, such as in the area of Germany/Austria/Switzerland or in Southeast Europe they extend across frontiers. On the other hand, there is in some states two different railway electrified systems on some railways (France, Spain, Russia). All of this was developed over time, sometimes due to a conscious demarcation from the neighbours, in some cases for political reasons. The four most common railway electrification systems used in Europe are:

The locomotive changes that used to take place when moving over from one system to another in border stations are gradually being dispensed with due to the proliferation of multi-system locomotives that can handle up to four electrification systems - provided these tractive units have the different train protection systems on board for each country. However, the performance of multi-system locomotives may vary depending on the type of current and voltage.

The task of the catenary

The catenary supplies vehicles with the energy required to power them. It is the last link in the chain of the traction power supply, which begins at the power station. The catenary is required, since electrically propelled rail vehicles - unlike in industry - are mobile, and some are travelling internationally. Therefore, there are certain standards for the interaction of overhead line and pantograph systems with which all vehicles to be used on these lines must comply. Where appropriate, different pantographs are fitted (one for Germany and Austria, a second for Switzerland).

In general, and on all continental European railways, the external power comes from the catenary which supplies the electrical load with power from above. The overhead catenary either uses special wire profiles made of copper alloys or small rail profiles. The latter are widely used in tunnels.
Instead of an overhead line, some underground railway lines and commuter railway lines have a power rail at the side, a third rail, which makes smaller tunnel cross-sections possible and thus lower construction costs. Here the voltage is, however, limited to 1,000 V AC or 1,500 V DC. Both systems are installed on the two system-S-Bahn (commuter railway) in Hamburg. There is a catenary and a live rail at the side. The use of an underground power supply, such as on some inner-city track sections of trams, in particular, in France has made little progress. It can be recognised by a covered slot centred between the rails of the track which carries the power cable underground.

The overhead wires of high-speed lines are not only designed differently to those of conventional railway systems, due to the mechanical stresses, they are also made of a special alloy. This provides better contact, thus reducing voltage breaks between the contact wire and pantograph. The TGV in France shows that speeds up to 350 km/h can be achieved in normal operation without any problems. However, the overhead line system was strengthened for the well-known record runs.

Due to the wide range of electric railways from industrial railways through tramways to high speed lines it is no surprise that there is also a wide range of overhead line system designs.

Basically, two types can be distinguished: The simple contact wire is a basic wire suspended on attachment points. The overhead line can be anchored at the side as flat chain or designed with carrying cable as vertically shaped high chain. The standard in mainline railways are the high chain or chain catenary with carrying cable, droppers, slings, anchors and the overhead line masts which carry everything. Because the contact wire should be as horizontal as possible, it is placed under tension. The catenary design must be able to take these horizontal forces as well as the vertical forces (pantograph-upward pressure, tare weight) and the unavoidable oscillations. The contact wire and carrying cable are anchored separately and kept under tension.

At regular intervals, supply points are available and sections of the line can be electrically separated from one another. Curve reductions on the outer side of the curve enable the overhead line to follow the track curve in the shape of a polygonal traverse. In order to reduce the wear on the wearing surface of the pantograph every overhead line is arranged in a continuous zig-zag curve within given limits relative to the centre of the track. 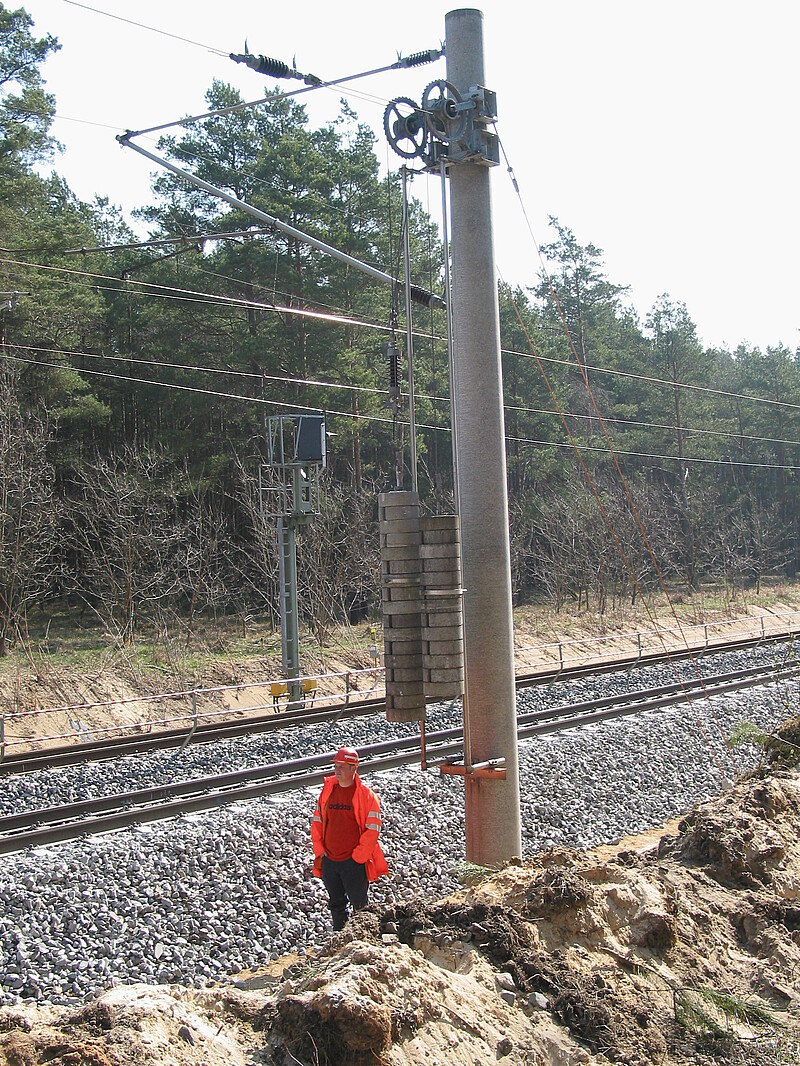 Overhead wire to tension and fix the catenary
© Plasser & Theurer 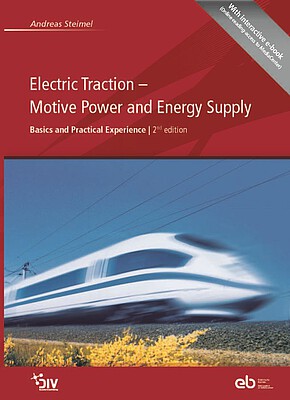 The focal point of the book will be the disposition of electric traction units powered by three-phase induction motors. We shall discuss the stationary and dynamical behaviour of the squirrel-cage induction motors and the principle and construction features of pulse-controlled inverters, as well as scalar and field-oriented control systems and four-quadrant power converters, feeding the DC link of the inverters. As is appropriate to the lesser importance these drive systems have nowadays, we will consider DC and AC commutator motors only in a cursory fashion, as well as their voltage control.

Railways aim at transporting people and freight safely, rapidly, regularly, comfortably and on time from one place to another. This book is directed to track infrastructure departments contributing to the above objective by ensuring the track infrastructure’s reliability, availability, maintainability and safety – denoted by the acronym RAMS. Regular, effective and affordable track maintenance enable RAMS to be achieved.