Even where local conditions, economic necessity or system requirements demand that track laying or track renewal shall be carried out using traditional methods, Plasser & Theurer has been able to give fresh impetus. As early as 1971 the SUZ 2000 I was developed and built for Indian Railways. This is a combined system with gantry units and individual laying of sleepers. A total of six units of this type have gone into service on Indian Railways. In the years 1982 and 1983 Plasser India built 30 panel laying units entirely in India.

The WAPS system, a combination of panel laying unit and an electric flash-butt welding unit, was developed and first put into operation for track laying on the west coast of Africa.
A panel laying unit has also been developed for use on urban transport lines which have special problems such as curves with small radii, limited clearance gauge, etc., in co-operation with the Budapest Transport Authority which has been working since 1979 with great success. 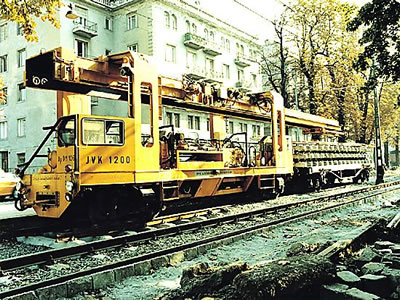 The PK gantry unit system developed by Plasser & Theurer can install or remove track panels up to 13 metres long using a single gantry unit, and track panels up to 18 metres long using two gantry units. In this case the two gantry units are connected by a lifting beam. The gantry units run on new rails laid out at the side of the track or on auxiliary rails. There are also gantry units available with single sleeper laying devices.
Due to the company’s long experience, Plasser & Theurer can offer custom-made laying systems which can ideally meet both the technical and the economic requirements for the intended field of operation. 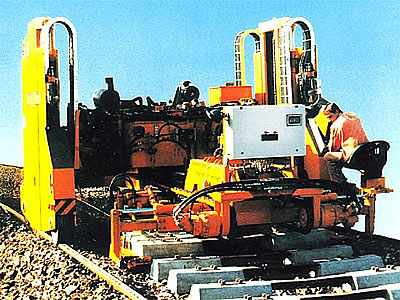 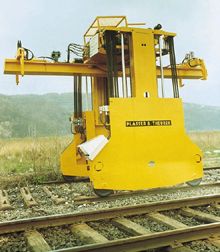